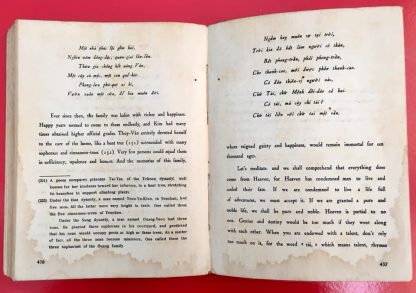 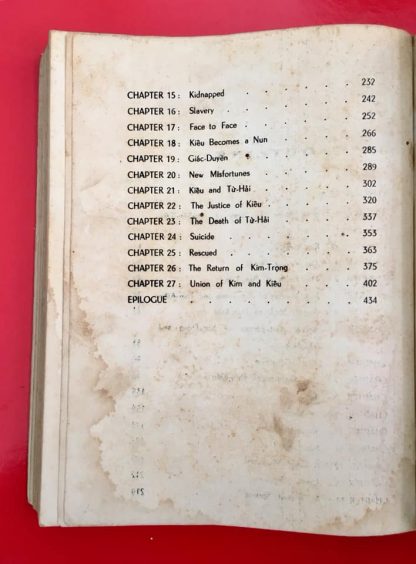 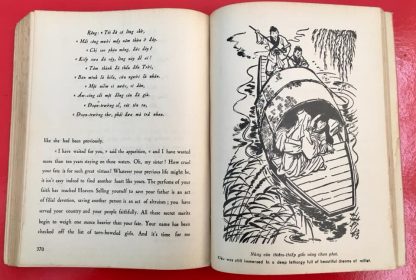 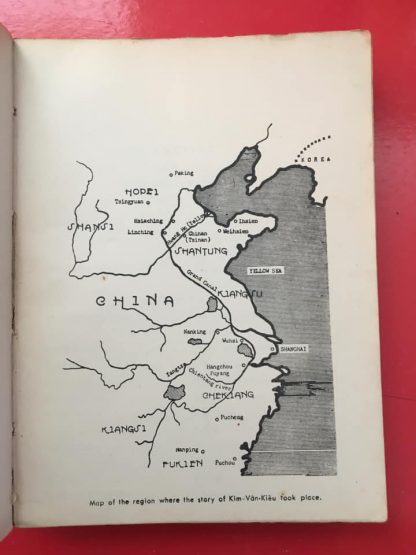 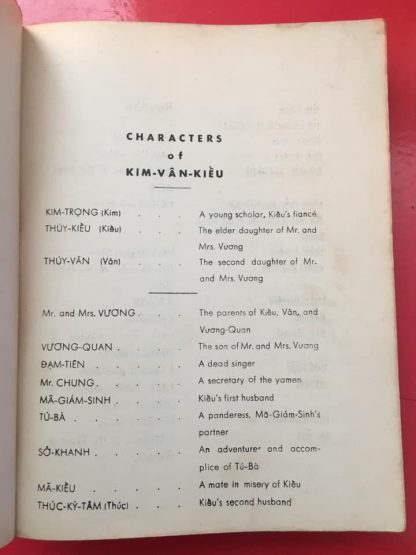 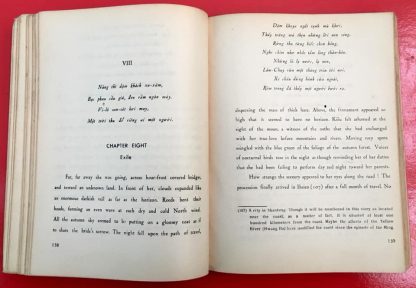 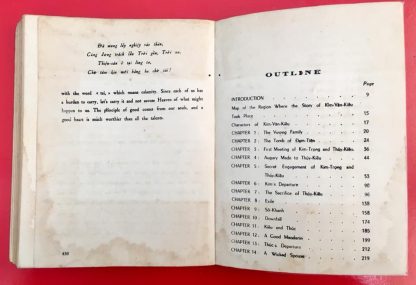 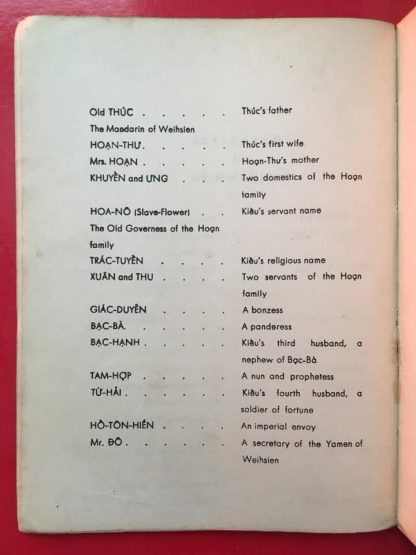 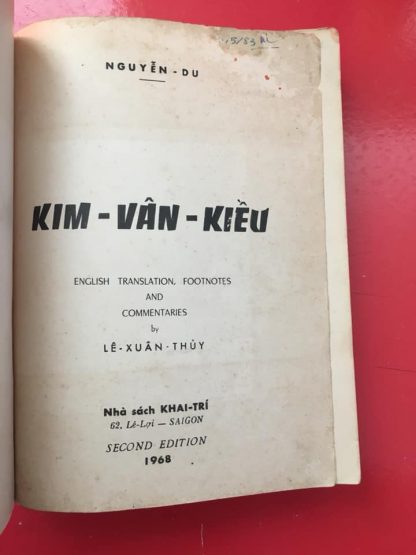 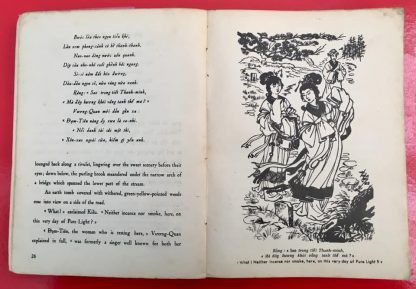 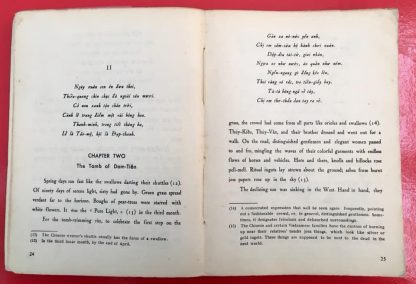 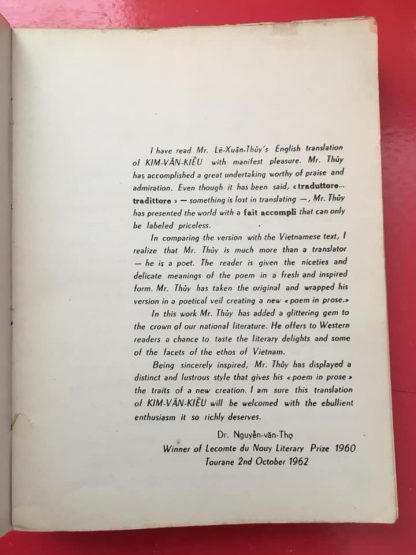 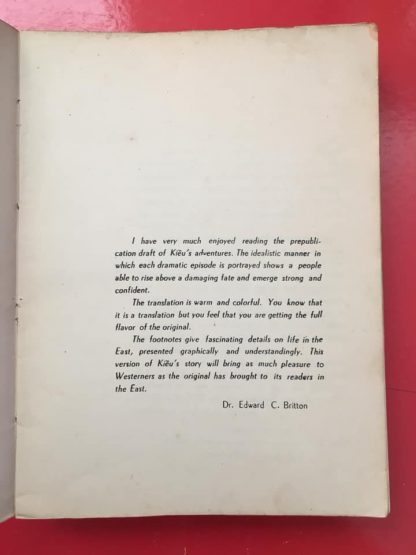 Kim Vân –Kiều, this perfect work to wich one refers as one to a drama pf Shakespeare, a tragedy of Racine, afuneral oration of Bossuet, to the poems pf Henry Wadsworth Longfellow or Robert Frost, is regarded as the most beautiful jewel of The Vietnamese language in painting the most tender sentiments of the huaman soul.

Kim-Vân-Kiều is a novel of 3250 verses of 8 and 8 syllables, which succed each other alternately in a particular form of the Vietnamese prosody. This in an adaptation from a popular Chinese novel like “Le cid” adapted by Corneille from a Spanish drama of Guilhem de Castro. The author, Nguyễn-Du, knew how to insert in his work the qualities which did not exist in the original text, and succeded in transforming a quite common story into a poetic masterpiece of the ratest quality.

Kim- Vân-kiều has been regarded as a store of beautiful Vietnamese words that the Vietnamese use to express Themselves in everday conversations.

Nguyễn Du, the author of Kim-Vân –Kiều , was born into a great mandarin family in 1765, in the village of Tiên-Điền, located in the district of Nghi-Xuân, province of Hà-Tĩnh, Central Vietnam Endowed with remarkable intelligence, at the age of nineteen he passed the tests reserved for the literati.

But, while young in age, this fututr great Vietnamese poet perhaps better described as the future creator of Vietnamese poetry, received from political events a shock that affected him morally until the end of his lifetime. His adolescence was terminated tragically amidst the horrors of  a civil war in which he sadly witnessed his king dethroned by the Tây Sơn. From that time, he lived with a secret sorrow in his soul. He was one of those who were born as loyal as they were proud, one whom glory itself could not appease , and who, forced to accept certain honors at the beginning of the nineteenth century, suffered from them as if they were a kind of fatal treason toward the cause and the regime he had one served. His family had served the Lê for generations . As an heir to their devotion toward this dynasty, first he devoted all his intelligence , body and soul, to an attempt of restoration – a movement of which he was the leader – but the failed. Abandoning his active life, he spent sometime in seclusion in the moutainous region of Hồng-Lĩnh, living in his own way, and pursing the pleasures of hunting and fishing.

But, some time after, he was forced to accept the post of a mandarin by Emperor Gia-Long, following the latter’s accession to the throne in 1802. Though accepting this honor reluctantly – for he had promised never to go out of his place of seclusion- he carried it out consciencetiously. He occupied many official posts with distinction in the province of Hà-Đông, in Huế, and subsequently in the province of Quảng-Bình. At the last location, he was elevated in 1813 to the rand of “Column of the Empire”in view of his wise administration.

Nguyễn-Du was selected three times to head an Embassy to Peking. Through the first mission he came in contact with a Chinese novel – the story of Kim-Vân-Kiều, which he adapted in vietnamese verse. He transformed this picaresque and quite verbose Chinese novel into a long and picturesque story regarded as the most beautiful poetry ever written in the Vietnamese language. The story concerns a young maiden endowed with all spiritual and bodily graces; an elite, who, placed between love and filial devotion, deliberately chose the harder way: she sold herself to save her father, a victim of an unjust calamity. And from that day, she passed from one misfortune to another until she sank into the most abject depravity. But, like the lotus, in the midst of this mire, she always preserved the pure perfume of the her original nobility.

Immediately after he had been entrusted with a third mission as Ambassador to the Court of Peking by the newly crowned Emperor Minh-Mạng, Nguyễn-Du died on August 10, 1820, at the age of fifty-five, of a serious disease for which he refused treatment. At his last gasp, he asked one of those who stood around to examine his pulse. When he has told that his body was growing cold, a sigh of relief issue from his lips. “Good”, he murmured, and passed away without making any recommendation.

Nguyễn-Du was versed not only in Confucianism but also in Buddhism and Taoism. He excelled in music, painting, and in chess as well as in poetry- the four habitual distraction of a real scholar of the Far East.

In addition to  “Kim-Vân-Kiều” (1813), we are indebted to him for three selections of poetry written in chinese, a short poem of 34 verses written in a lighter vein, entitled “Words of a Young Hat Seller” and a Vietnamese poem of 182 verses, “Chiêu Hồn” (1792). The latter composition was a stirring addresse to the departed dead, written on the occasion of the Buddhist All-Soul’s Day.

Kim – Vân-Kiều, besides its literary value, has a psychological value which reveal the author’s personality. In this masterpiece of Nguyễn-Du, every passage is superbly written and expressed with the utmost nobility of his soul. Even in the most scabrous passages, plain realism is avoided. His muse is never coarse. Its niceties conceal certain gross passages which are depicted so skillfully that they never offened the reader. Even the choice of metaphors and paraphrases resorted to so as to avoid any transgression of the rules of decency, denotes in itself an instinctive and constant care and respect for others.

Nguyễn-Du reached his aim. There is no Vietnamese not deeply affected by the verses of Kim-Vân-Kiều, whose echo seems to flow like waves of deep emotion that gathers love in his heart, a love so strong that it appears to become a superstitious passion attached to him. For certain persons, chiefly the fair sex, these verses have become a selection of science, a book in which they can read their future. They open the book at random; they consult the passage which first meets their eyes: this passage will constitute their horoscope.

How happy the writer who could ,in one poem, make the whole soul of his race vibrate anh sing!

For one to come, under the dear Vienamese roofs, during sweet hours of lovely nights under the lamplight, white-haired old men and young dreaming women will still read the adventure of Thuy-Kiều with everlasting curiosity and moving fervor.

Map of Region Where the Story of Kim Vân Kiều

CHAPTER   7:   The Sacrifice of Thúy-Kiều

CHAPTER   26: The Return of Kim-Trọng